We can confirm that Francisco’s new album will be released, worldwide as a digital download, on Monday 12th April 2010. It will be available in all the usual digital stores, including Amazon and iTunes.

Recording and mastering on Francisco’s next album is finally complete!

Recorded in the summer at St. Thomas’s Church Stockport, England, “This is Francisco Yglesia” is a dramatic and joyous testament to the awe and wonder of the Paraguayan harp.

The track selection is a mixture of traditional Paraguayan and other Latin pieces (including his signature ‘Pajaro Campana’), plus several of his own striking compositions (not least the often-covered ‘Vamos Amigos’). Also included is a mesmerising acoustic re-recording of ‘Shimmering Harp’ from his debut 1980 album of the same name, and an all-new cover of Passion Pit’s contemporary and evocative “Sleepyhead”. 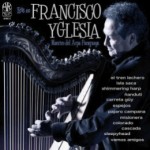 The album showcases Francisco, and the Paraguayan harp, like neither have been recorded before. He plays all 12 tracks live, solo & unaccompanied, and they’ve been in captured in pin-sharp high fidelity. This is the definitive Paraguayan Harp album.

There’s a new video posted on this site!

During the first recording session for the album, Francisco improvised a jam around the Passion Pit song ‘Sleepyhead’, although it was actually inspired by a cover of the song by the band ‘Run Toto Run’.