This is Joules, the owner of Analogue Rock Records.

I have decided to close down Analogue Rock Records so I can dedicate more time to my family and my day job. This has been a difficult decision, but the costs involved are only fractionally covered by the income, and now I have a young family, I am increasingly struggling to find the time.

I will continue to keep an eye on this website on behalf of Francisco, but I have now stopped selling CDs, and Francisco’s album “Este es Francisco Yglesia” will start to disappear from download and streaming sites soon.

Fortunately I have a good friend who owns an excellent Internet and mail order record and CD store, and they will be selling Francisco’s CDs very soon. I will post details here when ready.

It has been a pleasure to know so many of Francisco’s fans who have bought his CDs and listened to his wonderful music. But most of all, it has been a tremendous pleasure and joy to have worked with my good friend, the finest musician I have ever met, Francisco Yglesia.

Just a quick note to say that Analogue Rock Records have taken-over the sale of Francisco’s CDs.  This means you can now buy Este Es Francisco Yglesia and Shimmering Harp again, after a couple of months offline.  We’ve also fixed a few gremlins in the website too. 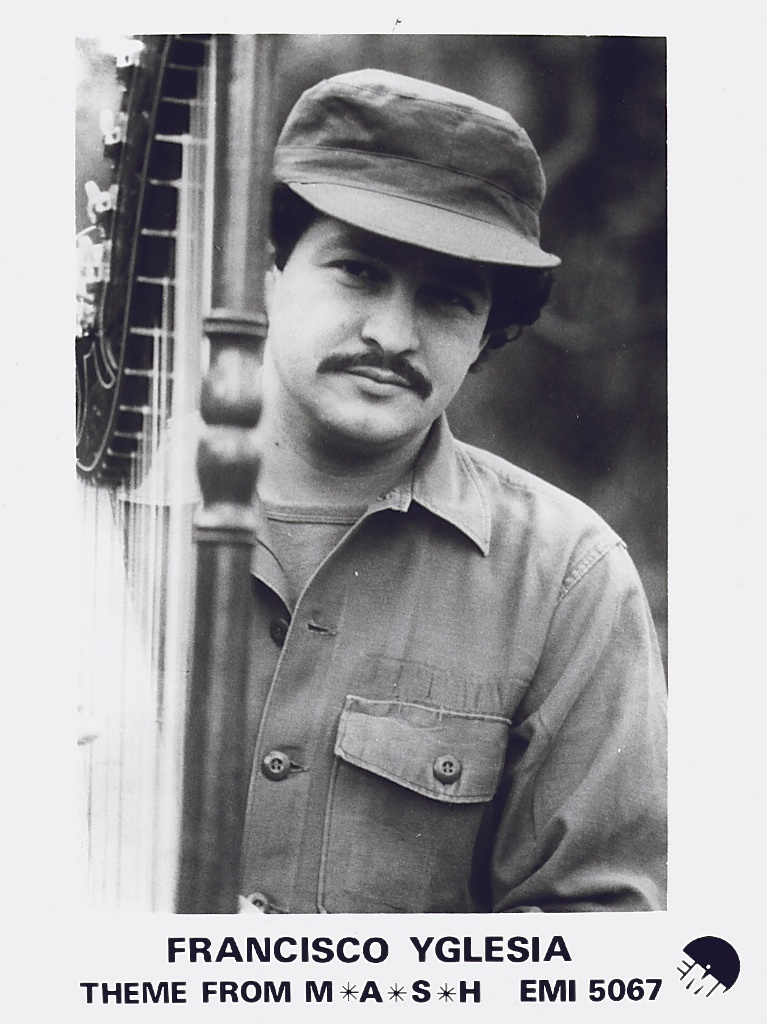 Francisco has just mailed me a scan of this photograph.  As you can see, it is a publicity photograph to promote the release of “Theme from M*A*S*H”, which he released as a single in 1980.  We presume the photograph dates from the same year.

“Este es Francisco Yglesia” is mostly an album of traditional Paraguayan and Latin music, including some of Francisco’s own compositions.  “Sleepyhead”, however, is an arrangement of an anthemic 2008 single by the Massachusetts indie rock band Passion Pit:

So, what on earth is it doing on a Francisco Yglesia album?

I should know better, but I am still amazed when I watch Francisco hear a tune just once, any tune at all, then almost immediately reproduce it on the harp.  He makes this look very easy, but of course, he has been practising for the best part of six decades.

When we were planning the first “Este es” recording session, my brother (Dan) and I had  been listening to a lot of Passion Pit.  Dan was then a producer for Channel M Television in Manchester (UK), and had recently recorded Passion Pit for a TV show of his.  And, Dan’s Channel M colleague Rachel had a band called Run Toto Run, and their cover of Passion Pit’s “Sleepyhead” was becoming a YouTube hit:

The night before the recording session, we played Francisco both versions of Sleepyhead, and asked “what do you think of this”? He smiled, particularly at the Run Toto Run version, and in front of Dan’s rolling camera, basically did the following:

Everyone loved it. “We’ve got to have that on the album”, I insisted, impatiently.  But, ever the perfectionist, Francisco said “No. I think I can do better. Give me some time”.  It hadn’t been the plan, but we booked a follow-up recording session for a few months time.

By the time session #2 came around, I’d almost forgotten about Sleepyhead.  But towards the end of the day, Francisco said through the intercom “OK, I think we should try Sleepyhead now”.  What we heard then is what you can hear now on the album. When he’d finished, the team in the control room just sat in stunned silence. One of us might have said out loud “That’s a take!”, but there was no need to state the obvious.

Francisco had been listening to both the Passion Pit and Run Toto Run versions very carefully. Despite being the same song, the two versions differed greatly, yet Francisco had created something both beautiful and unique again. But it wasn’t until some months later that the any of us (Francisco included) got the whole picture…

We eventually learned that the main riff from Passion Pit’s “Sleeepyhead” is actually based on a sample from the traditional Celtic song “Óró Mo Bháidín”, as recorded by Mary O’Hara. And on what instrument does Mary O’Hara play “Óró Mo Bháidín”? Well, it’s not a Paraguyan Harp, but it’s a harp nonetheless.  The Clàrsach and the Paraguyan Harp certainly share a common ancestor.

It will come as no surprise to anyone, that since “Este es Francisco Ygleisa“ was released digitally in April 2010, the most popular download from the album has consistently been “Pajaro Campana“. No other song is more closely associated with Apra Paraguaya. But, what is the second-most popular download? Is it “Milk Train“? “Colorado“? No. Even Francisco was surprised when I told him it was actually “Sleepyhead”.

But why not?  From Mary O’Hara, to Passion Pit, to Run Toto Run to Francisco Yglesia. From Ireland, to Massachusetts, to Manchester.  From Harp to Harp.  The circle is complete.

Just a quick clarification on shipping costs for the CDs.

So, if you don’t live in Paraguay or in the UK, then you can order as many CDs as you want for the fixed shipping charge of £1.90.  And you can save even more money by ordering both of Francisco’s CDs together at a discounted price!

But first, why not follow Francisco on Facebook.  If you do, you will see a very special offer that you can use in the online store.

As I am sure you can see, Francisco has a brand new website!

We’ve only just launched, so there still could be some teething troubles. Please let me know if you have any issues, comments or suggestions.

Over the coming weeks, we’ll be adding extra pages to enable you to purchase Francisco’s albums online.

Finally, if you were subscribed to Francisco’s RSS feed from his previous site, you will need to subscribe again to make sure you don’t miss out on any update.

That is all… thank you!